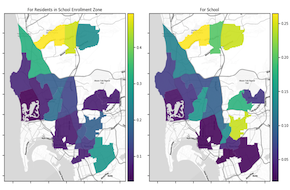 A descriptive analysis of the differences between the demographics of schools versus the schools’ enrollment areas, for schools in the San Diego Unified district.

Since at least the early 1980’s, San Diego unified has pursued a voluntary busing policy for desegregating neighborhood schools. The core of that policy is Magnet Schools, high-quality schools oriented around specific topics or educational goals, which were preferentially situated in lower-income and minority neighborhoods. Along with a generous city-wide busing program, the magnet schools would encourage higher-income families to voluntarily send their children to schools in lower income areas. The District also made it easier for lower-income parents to send their children to schools in higher-income neighborhoods.

The main datasets we’ll be using are:

( Caveat: we’ll be using demographic values from the American Community Survey, which have a sampling error. We’re ignoring that error, because it is hard to include in vizualizations, but if we were doing ranking or numerical comparisons, it would be important to include these errors. )

If you’d like to see how the whole process works, see the Jupyter notebook available at the link above.

Our analysis is driven by what San Diegans want to know; anyone is welcome to post data questions for our analysts.

Ask your data questions on our Q&A site.

You Are The Analyst

Our insights are generated by volunteer analysis, both students and professionals. We offer training and a welcoming community where you can hone your skills and solve important problems.